Our holiday to Italy seems like a distant memory now and with Andy’s impending big hip op, we felt that we wanted to make the most of the summer. Neither of us can quite agree how we ended up glamping on the Isle of Wight and after the first night, neither of us was looking to take credit for the decision. We tried in vain to enforce a 7pm bedtime on our children (two nights running). Who were we kidding? We were never going to be able to enjoy a quiet night for two on the decking, looking out at the stars. It was light out for a good two hours past the children’s bedtime and other kids could clearly be heard playing outside, as noted by our four year old. This also resulted in our 2 year old waking up at 5am two mornings on the trot – yawn! By the third night, we had learnt our lesson and all went to bed at the same time.

We’ve both always enjoyed camping but this was the first time that we have been with the children and neither of us had ever been glamping before. It’s fair to say glamping is a bit of a cheat; yes there is canvas involved but there is also electricity to provide light, charge a mobile phone and to power a television and a hairdryer, plus beds with duvets and soft pillows and cooking facilities. 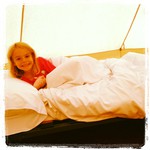 We soon abandoned the notion that we would cook dinners, although Andy did manage to do some pretty good scrambled eggs on toast one morning. The shower block is however the same for everyone, with the push taps on the showers to make sure you don’t spend too long and the invariably muddy floors and cheap toilet roll. Showers are no fun with a four year old and two year old in tow; I might add on separate occasions, as the cubicles are too small and the threat of little hands unlocking the door at any moment is nail biting. Obviously remembering to take a towel to the shower block is pretty imperative, although it turns out that a top will do just as well to dry off. Also remembering to roll up your pyjama bottoms before entering the shower cubicle would make for a better start to the day; not a mistake that is made twice!

All that said, by Day 3 we were starting to get to grips with glamping and could happily have stayed for a few more days, so much so that we might even look at purchasing a proper tent next year.

‘I Did It Mummy’ fundraising for BIBS – https://www.justgiving.com/IDidItMummy